'God sleeps in the minerals,
dreams in the flowers,
awakens in the animals,
and in man knows that He is awake.'
- Paramhansa Yogananda

'..The Universe has been created only for time-pass..', my father had said to me with dismissiveness. On my questioning glance,  he clarified that  that this had been said to him by his guru. Hmm.. studying was then just another boring time-pass.. I logically concluded. My mind started to fill with all the other things I could be doing to pass time in this universe.   Thankfully, my mother, realizing the thought process going on in my mind,  scolded me to get back and study..Life is no timepass..its serious work..she reminded me.

My mother's view about the seriousness of life stuck with me till my father passed away. Seeing his body turn to ash made me realise that maybe life is not meant to be taken too seriously. After all, one day, my body also will turn to ash and all the mundane worries of this world will not matter anymore. It was this thought that made me realise that there has to be a purpose why god created the universe in the first place. Surely, God could not be sadistic!

There is a saying that 'when the pupil is ready the guru will appear'. The guru appeared in the form of various books, the most important of which was the book ' Conversation with God'. The book mentioned a story which went like this..

" In the beginning, there was just  'one supreme being'. This 'being' was all and everything. There was nobody else. It got bored as there was nobody else with whom it could talk or communicate with. There was no struggle as it got everything it wanted. So the being decided to do something about it. He utilised his sole power of dreaming and dreamt the universe. At first, he divided himself into innumerable things, both animate and inanimate and the drama began.

But there was a problem, no matter how much he divided himself, every part knew that all are the one and the same being. As such, there was no excitement or fear. So the 'being' decided to alter the program of the dream so as to make everybody forget who they are  and also that they are the one and the same being. And as such the universe came into existence and the drama of life started."

The above story amused me initially as it meant that this world is a dream and that I am part of god. But when I thought about it deeply, it began to make sense. If I am part of god, then I should have the power to dream.... which I have. Infact, I create my own universe in my dream and I do not know I am dreaming while I am in the dream. A solid thing in a dream feels like a solid thing. A pain in a dream  feels like a real pain. Talking to a person in a dream feels real.

Infact, research has proved that every living and moving thing be it animals and even  babies are born with an innate power to dream and create their own universe.

Wow.. it was so simple I thought. From this perspective, when I went deep into science , the entire mysteries of science, be it the formation of the universe, the emptiness of atom, the power of thought over matter etc.. began to seem so simple and no mystery at all. 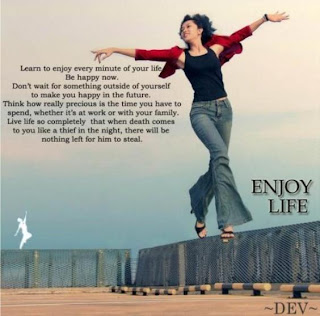 God definitely created this universe for time-pass and enjoyment by having nice and different experiences. This is also implied by the design of the human body which is made for enjoyment and begins to age faster in the presence of stress.

Understanding the reason for life made me a lot less serious.  My dad's guru was right..life is for time pass and enjoyment..I am doing it  by  writing this blog..and you are doing it by reading this blog....:)

( ofcourse..do not tell the same to your kid right now..else their studies will go down the drain..)

Ofcourse, the higher purpose of life is to continuously evolve higher and higher and ultimately be one with god. Knowledge of reality is essential. Also, the sages  have said that meditation is the fastest way..control the mind and u control this dream. This is for another blog though..:)
No comments:
Email ThisBlogThis!Share to TwitterShare to FacebookShare to Pinterest
Newer Posts Older Posts Home
Subscribe to: Posts (Atom)