" People have forgotten that religion was only a means to an end. Instead it
has become an end in itself. "

...Long time ago, certain people through meditation and other practices were able to go beyond this illusion and see that the world is a figment of the mind.. a dream.  They experienced that the truth of the statement that the world is in you and you are not in the world. They could see and feel the truth that all is one.

Having gone beyond the dream , they wanted to define the paths that people could follow to switch off the dream generator..i.e the mind. This was akin to switching off a computer else it will keep you engaged. Broadly, four paths were defined.

One can attain liberation by an intense enquiry. This is similar to understanding the design of the software and hardware of the computer and then going straight for the shutdown button. There is no confusion. A keen intellect and inquisitiveness is required.

B. Raja Yoga - Science of physical and mental control

This is the yoga of meditation where a person is taught to become temporarily dead consciously and silence his mind so as to see what is beyond. This relies on faith and control of one's mind and body.  This is akin to deliberately fiddling with the computer so as to lead to a controlled  shutdown. It requires perseverance.

This is chosen primarily by those who are of an outgoing nature.  It teaches one to become dispassionate to the results and avoid attachments and habits so as to empty the mind. Mantra's are used to focus the mind.  All deeds, be it good or bad are like seeds in the mind. The trick is to prevent the seeds from germinating and the only way to do that is to let go of the fruits of the deed. This is akin to letting the computer run and do its thing and not press any keys as there is nothing more to be done..soon it will shutdown automatically.

This path appeals particularly to those of an emotional nature. Through prayer, worship and ritual, one surrenders himself to God, channelling and transmuting his emotions into unconditional love or devotion. Chanting or singing the praises of God form a substantial part of Bhakti Yoga. The emotinal state generates such a huge spike so as to the shutdown the mind and reveal God. It is akin to a power surge which shuts down the computer.  It is the easiest to follow but also the most dangerous as a highly charged emotional state can lead to hallucinations and fanaticism among other things. All religions are an offshoot of Bhakti Yoga. 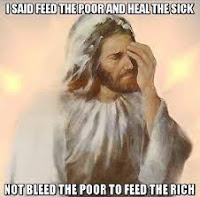 People who were of keen and an inquisitive nature, generally followed the first two paths. Many become introvert and lost interest in the world as they realised that the world was a dream. Nothing mattered to them.  Some tried to educate the general population at large..( Buddha, christ etc ), but largely failed. Some took part in this dream and helped others, ( Like krishna helped the Pandavas ), and  some just wrote a book and went away.

The General population tried to follow the path of  Bhakti yoga as it was an easy path to follow.  This led to the rise of religions and fanaticism as well. People forgot the aim and the religion became an aim in itself resulting in devastation of this world through the ages.

Perhaps it is time to let people know the truth about Yoga which can lead to their well being and reveal the world hidden inside them. The adoption of 21st June as International Yoga day by the world at large marks a first step in freeing the world and its people from religion. It is the first step towards the light...towards a brighter future for the entire world.....:).

1. The above are broad paths of yoga. They are not mutually exclusive and one has to adopt or combine  the other paths as per circumstances for faster evolution.