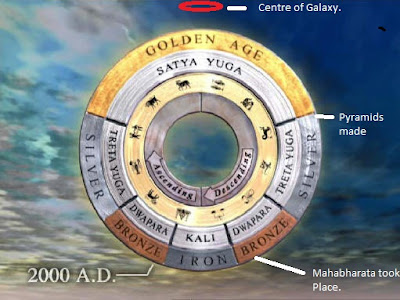 'Where am I' and 'where am i going?' I asked myself. I was not in a car but lying on my bed and some philosophical mood had struck me. God probably must have heard me cause he answered it in the grandest way possible in the next book i picked up.

The name of the book was 'The Holy Science' written by Paramahansa Yogananda's Guru Shri Yukteswar Giri. The book was written in 1894 at the behest of another holy man, Shri Mahavatar baba. I read the book and i was shocked at the revelation that the present age is not the Kalyug, it is the Dwapara. How could it be? Everybody knows it is the kalyug age? ... I could sense somebody chuckling up there looking at the bewildered look on my face...:)
According to the author Sri Yukteswar Giri , just as the earth revolves around the sun and takes about a year, the sun also revolves around another star and takes about 24000 years to complete one revolution.

When our sun, during its orbit with the other star, is at the farthest point from the centre of the galaxy, the intelligence of the general population ( exceptions are always there ) is limited and does not extend beyond the five senses. That period is called the Kali Yuga. ( See Diagram above )

As the sun, during its orbit around the other star, starts coming close to the centre of the galaxy, ( called the ascending phase ) , the intelligence of mankind begins to increase and man starts understanding the finer forces ( electrcity, magnetism etc.... ). In a way, man starts utilising more and more of his brain. The Dwapara Yuga started somewhere around A.D 1600.

The author gives evidence to support his theory. About 1600 A.D. William Gillbert discovered magnetic forces and the presence of electricity in all material substances. In 1609, Kepler discovered the important laws of astronomy and Galileo produced the telescope. In 1621, the microscope was invented. In 1670, Newton discovered the Laws of Gravity etc. In the political world, people began to have respect for themselves and civilisation advanced in many ways. England united with Scotland and became a powerful kingdom. Napoleon Bonaparte introduced his new legal code in southern europe. America won its independence and many parts of the world became peaceful.
Technologically, the world began to be covered with railways and telegraph wires. I further discovered that in 1888, Nicole tesla invented the first practical AC motor ( he saw a vision of the design of the motor while walking ) which started the industrial revolution. Albert Einstein's theory of relativity was inspired by a dream. Frederick kekule discovered the chemical structure of benzene again in a dream. Moreover, many important discoveries were also made purely by accident like penicillin etc. And these were just the honest guys!..:)
In this age, man starts playing with his new toys that he has just invented and is akin to giving a children a pistol. It is a dangerous age as mankind is learning to use its new found discoveries to judicious use. hmm... I could fit the proliferation of nuclear weapons and the environmental degradation through human activities nicely here.
In the Treta Yuga, the general population begins to realise that everything is the mind. The next Treta Yuga will start somewhere around A.D 4099.
In the Satya yuga, general population comprehends the nature of god. Everybody is a Devta, the knower of God.
Similarly, the author noted that the inverse is true during the descending phase when the sun starts moving away from the centre of the galaxy. Man's capacity to understand begins to diminish.

Intrigued, i did not sleep that night and started researching on the net. Surely, if our sun had a dual companion, then we would have known by now, I thought. God must have realised that being a law student, i was still skeptical to change my view and was looking for further evidences to prove the theory correct. Well, i found it on the net. Inspired by the book and the compelling evidences, an institute called Binary Research Insitute was formed to seek out the star around which our sun revolves. I also read the book ' The lost star of myth and Time' which is based on the book ' The Holy Science'. The book contained further evidences along with calculation that lend further credibility to the Yuga theory and actually solves certain long standing riddles. There is also a movie by the name of ' The Great Year' which lends further credence to the theory. The theory is still being investigated by the scientific community as it seeks to replace certain long standing assumptions and is slowly turning the skeptics into believers.
For me, the path of history till now started to make sense. My perspective changed. It was as if the book gave me a new lens and a map on which i could place the history of the world..... The current age is not so bad as some people make it out to be. Think....At what other time in the documented history of the world, has the entire world come to the rescue of countries afflicted by natural disastors ? In which other age was the rule of law followed in major parts of the world. In which other age, elected representatives run the countries rather than royal blood? In which other age was there a body like the United Nations. This age is ofcourse far from perfect. We have our issues but we also have the tools to take care of it and we are trying.

Further, discoveries are happening at such a rapid pace that it is difficult to keep a tab on them on daily basis. Fifteen years ago, we could not have predicted that the internet would be such a boon or that their would be mobile phones even with the vegetable vendors and even beggars. We startle at the intelligence of kids today as they pick up things at such a rapid pace.

None can predict what will happen in the next 10 years but going by what has happened over the past twenty years and the conclusions of the theory in the book ' The Holy Science', perhaps, the current age is not so bad after all and there is a lot to look forward to in the future....:)
I further realised one thing. Be careful what you think.. God is listening...:)